Texting While Driving in Florida: Are the Laws Changing? 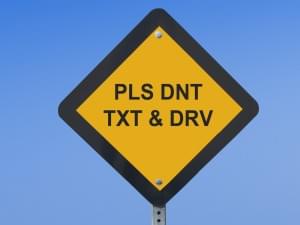 Using a mobile phone while driving isn't just unsafe, it's illegal and punishable by fines in many states. However, many of the fines are so small that they're easy to ignore. Texting and driving is a difficult violation to enforce, and police forces around the country have struggled to make drivers put their phones away through law enforcement.

However, some state legislatures are beginning to crack down on mobile phone use behind the wheel. Here's an example of what's going on in Florida.

Although texting and driving is a punishable offense in Florida, police officers can only issue tickets to motorists who have been pulled over for another offense. Mobile phone use while driving is currently considered to be a secondary offense, so police cannot pull a driver over for simply holding a phone in one hand and the steering wheel with the other. The current fine for a texting and driving violation in Florida is $30.

State Representative Rick Stark, D-Weston, filed a bill recently that would allow police to pull drivers over for nothing more than texting and driving. This is a much stricter approach to preventing distracted driving on Florida roads.

Representative Stark said that texting while driving is "something everyone’s guilty of."

Senator Maria Sachs, D-Delray Beach, submitted a companion bill in the Florida State Senate with the same language as Representative Stark's House bill. She says that the $30 penalty isn't strong enough of a punishment to deter drivers from texting while driving. If passed, her Senate bill would double the fines for texting and driving in school zones as well.

A Democratic State Representative from Boca Raton, Irv Slosberg, took a more gradual approach to texting and driving restrictions. He says that texting while driving should be a primary offense in school zones but a secondary offense everywhere else. If his bill is passed, this means that Florida drivers could get pulled over for doing nothing more than texting near schools but would have to commit another offense to warrant a stop in all other areas of the state.

"It’s not that I don’t want Stark’s bill to succeed – I do – but, you know, it’s my 11th year here," Slosberg said. "And I’ve learned that things don’t get done overnight. They happen in little steps – bites at the apple."

As you can see, texting and driving is a serious problem in Florida and all around the country. Until relatively recently, seatbelt usage wasn't mandatory in Florida. But after Slosberg's pushing, not wearing one became a secondary offense in 2004 and later a primary offense in 2009.

Almost all Congressional leaders in Florida are in favor of texting and driving laws. The current law passed in the House with 110 in favor and just six opposed in 2013. Those few members in opposition cited fears of excessive governmental control and invasion of privacy.