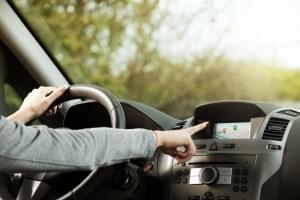 Touch screens are a big part of daily life. So it should probably come as no surprise that auto manufacturers are experimenting with touch screens on the steering wheels of new vehicles. How would you like to sit in the driver's seat with a touch screen steering wheel at your fingertips?

Researchers at Germany's University of Duisburg-Essen think that a touch screen steering wheel could reduce distracted driving accidents because everything would be right in front of drivers and safely within reach.

"If you have gestures on the steering wheel, you spend more time looking at the street," said Albrecht Schmidt, a computer science professor at the University of Stuttgart in Germany who worked on the university's steering wheel prototype.

The researchers developed a prototype of the touch screen wheel to test their hypothesis that it would result in less driver distraction. The wheel was constructed from an 11-millimeter thick clear ring made of acrylic and fitted with infrared LEDs. They attached an infrared camera to the bottom to detect reflections when a driver touched the screen. Test participants practiced several basic commands, including pinching their fingers together to zoom in and out during a driving simulation.

How Safe is the Wheel?

With this prototype, every movement that a driver makes to use the touch screen can be made using just the thumbs. This means that drivers can still grip the wheel as they normally would while staying alert on the road.

Perhaps the most useful application for this technology would be integration with GPS navigation systems. Instead of having to glance at a screen in the middle of the windshield or down at a phone, drivers could look straight ahead when in need of directions. At this point in their research, the developers believe that the touch screen's surface could be thin enough to break during a crash, thus allowing the airbag to deploy.

The touch screen's design is sleek and sophisticated, making it desirable for tech savvy motorists who want to be on the cutting edge of this emerging feature.

"Somebody in the ’30s decided it’s good to have the instruments behind the steering wheel," Schmidt said. "It may be time now, having entered the computing age, where we have to rethink if it’s very clever to hide one display underneath controls."

The researchers are talking with a few automotive companies to start trying the technology out in a few new cars on the road. They've even gone so far as to envision a display system that would actually project useful images directly onto the windshield to accompany the touch screen steering wheel.  But before any of these cars hit the road, more controlled testing is needed to ensure that the technology doesn't pose additional risks and distractions.

Do Car Accident Fatality Signs Make Drivers Safer?Texting While Driving in Florida: Are the Laws Changing?