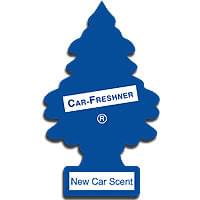 There's just something enticing and strangely desirable about that new car smell. You know, that fresh from the factory scent that precedes all of the smells of fast food, spilled coffee, and the family dog. Some people love the smell so much that they buy new car-scented air fresheners to relive their first moments with their beloved vehicles.

But have you ever wondered exactly what makes that new car smell and if could it actually be hazardous to your health?

Origin of the Smell

The new car smell is actually made up of a mix of chemicals that are contained in the various car interior features. Some of these features release volatile organic compounds (VOCs), which produce the familiar smell. These mostly come from petroleum-based solvents in plastic and vinyl, and they are considered to be air pollutants.

Over the years, lots of people have wondered if the chemicals that cause new car smell are toxic and hazardous to human health. Some of these chemicals, including ethyl benzene and formaldehyde, are found in paints and glue and linked to headaches and allergies.

A nonprofit group, the Ecology Center, conducted a study in 2012 to study the potentially harmful effects of the chemicals inside new cars. Although the researchers admit that the chemicals in some new cars are worse than others, they do make the following statement:

"These chemicals can be harmful when inhaled or ingested and may lead to severe health impacts such as birth defects, learning disabilities and cancer. Since the average American spends more than 1.5 hours in a car every day, toxic chemical exposure inside vehicles is becoming a major source of potential indoor air pollution."

However, not all research studies have proven that a new car's interior puts your health at risk. A Technical University of Munich study found that at most, the chemical compounds in new cars could cause allergies but nothing more.

Doing Away with the New Car Smell

Despite its nostalgic appeal, some automobile manufacturers are trying to eliminate the new car smell for health reasons. Toyota has started using water-based alternatives instead of solvent-based glues, and Ford has tried using soy-based foam instead of petroleum to reduce VOCs.

In the aforementioned study, the Ecology Center named newer models of the Honda Civic, Toyota Prius, Honda CR-Z, Nissan Cube, and Acura RDX as the vehicles with the healthiest interiors. The Chrysler 200 S and the Mitsubishi Outlander Sport rounded out the bottom of the researchers' list.

What to Make of it All

If you are really concerned about inhaling chemicals or are particularly sensitive to pollutants in the air, your best bet is to simply buy used cars! Most of the VOCs in a car's interior fade dramatically over time and only resurface on very hot days when the materials release more fumes than usual.

One of the best ways that you can avoid exposure is to simply roll your windows down on hot days to allow fresh air to flow into your car. But with car manufacturers taking all these studies into account, it's likely that the next generation of drivers won't even have the nostalgic association that connects chemical smells to the excitement and accomplishment of a shiny, brand new car.

Understanding Traffic Rules for RoundaboutsStrange Driving Laws from Around the World