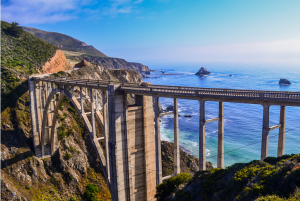 When it comes to road tripping in America, there's just something special about the state of California. Stretching along the Pacific Coast, this West Coast state has a little bit of something for every traveler. In fact, California's scenic roads and highways are often just as exciting as the destinations you have in mind!

Here are some of the best scenic driving routes in "The Golden State."

Without a doubt, the most famous and iconic road trip route in California is the Pacific Coast Highway, affectionately known as PCH. This highway stretches from north to south, pretty much up and down the length of the state. If you're pressed for time, you can travel just a portion of this route and save the rest for another vacation.

There's no way you can discuss iconic American road trips without bringing up Route 66. It's also known as Main Street USA because it passes through so many unique small towns from east to west. Route 66 originally ran from Chicago, Illinois through Missouri, Kansas, Oklahoma, Texas, New Mexico, and Arizona before ending near Los Angeles at the Santa Monica Pier. Sections of the road have been designated as historic sites, and it has become a pop culture legend through hit songs, movies, and TV shows.

Highway 101 hugs the California coastline and meets up with the Pacific Coast Highway. The section of this route that runs through Ventura and Santa Barbara are particularly scenic. There are some amazing restaurants, cafes, and local shops worth checking out along this drive. But be forewarned, traffic on this highway can get pretty thick, especially around Los Angeles and Hollywood.

Every world traveler should spend some time in the majestic Yosemite National Park, an unforgettable national park that's an outdoor lover's dream destination. Take Tioga Pass —also known as State Route 120— to reach this amazing destination by car. Just don't forget to enjoy the scenery with high, snowy peaks and untamed wilderness along the way. Keep in mind that because of the high elevation and snow, Tioga Pass is only open during the summer months. At just shy of 10,000 feet, Tioga Pass is the highest highway pass in the state of California.

California's natural environment has tall peaks, lush forests, sandy beaches, and acres of fertile farmland. It also has barren desert regions that are nothing short of mysterious. You can see some of these desert landscapes while traveling along Highway 395, which extends from Victorville to Lake Topaz. Expect to encounter tall mountains, deserted ghost towns, pristine lakes, and plenty of wide open spaces.

No matter where you decide to travel in California, always remember to make frequent stops to acquaint yourself with the diverse regions and enjoy the scenery along the way!