The History of Flying Cars 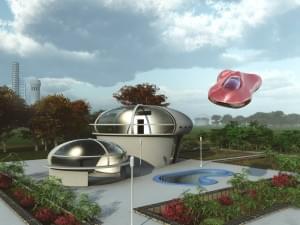 For over a century now, people have been dreaming about driving flying cars, high above the traffic and people down below. But just take a look around and you won't see any winged vehicles hovering above your head. Do you ever wonder why humans haven't been able to make it happen?

Throughout history, people have tried to make cars fly, but despite even modern technological advances, all four tires remain on the pavement. Here's a little bit about the history of flying cars and why they still haven't taken to the skies in 2015.

Legendary writer Jules Verne wrote about vehicles that could serve as a car, boat, and aircraft all in one. Check out Master of the World to read more about these versatile, flexible, and fast imaginary vehicles. The idea was little more than science fiction at that point, but it still intrigued engineers, designers, and manufacturers.

During the Pan-American Aeronautic Exposition in the year 1917, innovators exhibited the Model 11 Autoplane. Although there is no record of that automobile ever taking flight, it was an interesting creation of an early 1900s automobile with wings. About four years later, however, the Tampier Roadable biplane took a 2 hour drive from the Paris Air Salon at a speed of 15 mph.

Although flying cars were far from reality at this point in history, writers and artists continued to dream about them. Robert A. Heinlein wrote For Us, The Living: A Comedy of Customs, which had a plot about vehicles that could both fly and drive.

In 1947, Henry Dreyfuss developed the ConvAirCar, which was an automobile with wings and a propeller on the roof. The vehicle was made of fiberglass. However, it crashed during a test flight, resulting in a fatal accident. In the early 50s, Leland Bryan flew his Autoplane but ended up dying while crashing another version of it two decades later.

Another tragic flying car death occurred in 1973 when Henry Smolinski crashed in a test flight. His creation paired a Ford Pinto with a Cessna Skymaster. But despite these tragedies, people still dreamed of flying cars. The 1982 film Blade Runner featured police force vehicles that could both fly and drive.

A flying dune buggy, known as Maverick, won an award for successfully flying medicine out to remote areas of the world in 2009. After many airborne car attempts over recent decades, Paul Moller invented the M400X Skycar in 2011. And in 2012, the "street legal" Terrafugia Transition plane took a test flight in upstate New York.

Flying cars still remain a dream for many inventors and manufacturers, but the technology still just doesn't seem to be quite there. Many people have lost their lives trying to make this dream a reality, and there will surely be a more attempts in the decades ahead – but hopefully safe and successful ones!