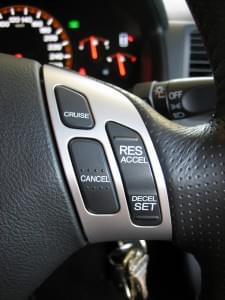 Cruise control has long been a favorite feature of road trippers, weekend warriors, and lead-footed drivers. But what if cruise control could do more than just maintain your speed and give your foot a break?

Advanced cruise control technology is here, and it promises to help drivers be safer on the road than ever before.

Adaptive cruise control is a feature that allows your car to increase or decrease its speed based upon the pace of the car ahead of you. How it works: You set a maximum driving speed, and then a sensor monitors traffic ahead to keep your car traveling a safe distance behind the one in front of you.

What is Adaptive Cruise Control Good For?

The most ideal condition for this technology is stop-and-go traffic during rush hour, when commuters quickly shift from 0 mph to 20 mph and occasionally even 60 mph. It's also an essential precursor to self-driving cars, which will require vehicles to not only monitor the car in front, but also on all sides in order to perform lane changes.

How to Use Adaptive Cruise Control

Drivers use adaptive cruise control much like they would standard cruise buttons and levers. To use it, you must turn on the feature, set the desired maximum speed, and then press "set." At that point, you can use "plus" and "minus" buttons to increase or decrease the speed. You can also set the desired gap between your car and a car traveling in front of you. Most drivers use a 2, 3, or 4 second following distance. Icons appear on the dashboard to indicate to drivers when the feature is in use.

Although prices are slowly coming down, advanced cruise control technology is still a pricey option for many drivers. Some advanced features can be added for as little as $500, but most full-range adaptive features run closer to $2,000. There have also been concerns about the technology's ability to function as well during rain, snow, and fog.

Honda has claimed that its adaptive cruise technology is capable of predicting the chances of a car cutting into your lane up to five seconds before it occurs. Its design relies upon a radar and camera to sense other cars nearby and assess the relationship between your car and others around you. If another driver begins swerving into your lane, the cruise control is capable of adjusting speed to avoid a collision.

Honda has described the feature's transition as smooth and something that wouldn't dangerously surprise the driver. The 2015 European CR-V Executive model will debut Honda's new cruise control feature – time will tell if this becomes a standard safety measure for cars in the future.

Safety Tips for Driving at NightTips for Buying Your First Car