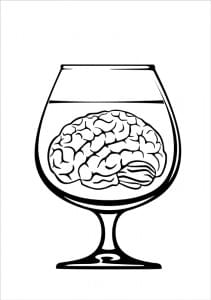 It doesn't take a neuroscience degree to understand that the teenage brain functions much differently than the fully-developed adult brain. The prefrontal cortex is the section of the brain that controls judgments, weighs outcomes and controls emotions and impulses. Therefore, "under construction" teenage brains are more likely to take risks, seek out thrills, become consumed by emotions, and look for immediate gratification.

So it should come as no surprise that alcohol affects the teenage brain differently than adult brains too. Not only is alcohol illegal for teenagers to consume in all 50 states, it's also incredibly dangerous.

Based upon studies with laboratory animals, adolescent brains are particularly sensitive to the effects of alcohol, most noticeably decreasing motor skills and causing memory impairment. In general, alcohol clouds a person's judgment and impairs the ability to use common sense and evaluate situations rationally – these effects are heightened in teenager brains.

According to Linda Patia Spear, Ph.D., a professor at the Center for Developmental Psychobiology at Binghamton University, "There is evidence that people who begin drinking at an early age may have problems with alcohol later in life. Research also has shown that adolescence is a time when remarkable changes are taking place in the brain. Just how alcohol use impacts this development or whether these developmental changes influence alcohol use is unknown."

Although more studies are needed to conclusively demonstrate the long-term impacts of alcohol, many researchers believe that gender is a factor and that gender also influences the perception of stress, which leads to prolonged alcohol dependency.

Unfortunately, drivers under the age of 21 are responsible for a significant portion of fatal alcohol-related auto crashes in America. Underage drinkers are more prone to binge drinking, peer pressure, and even drinking competitions.  Teenagers are often smaller in size than full-grown adults, making their bodies less capable of processing large amounts of alcohol.

All states have a zero-tolerance policy for underage drinking and driving. These strict laws are due to the fact that nearly a third of all 15-20 year old deaths are due to auto crashes, and about 35 percent of those fatalities are alcohol-related. Zero tolerance laws make it a criminal offense for drivers under 21 to drive with even trace amounts of alcohol in their systems.

Although the specific consequences vary from state to state, initial fines for underage DUI are often a few thousand dollars. Underage DUI charges are usually accompanied by a license suspension for at least a year and impoundment of the driven vehicle. In addition, drivers are frequently required to attend driver's education courses and perform community service. Depending upon the circumstances, jail time is a definite possibility for underage drivers convicted with DUI and drivers may also have to pay costly attorney's fees.

Underage DUI can have other serious and long-lasting consequences, making college admission, financial aid, and finding a job more difficult than it already is. It can also come up during future background checks, employment verifications, and on insurance rate quotes.  As you can see, alcohol, driving, and the teenage brain never mix – so be smart and stay safe!